The time is drawing near. All you MSIV's who are applying for radiology, that is great news! You have chosen a wonderful specialty!

What we found in our experience is that the quality of mentorship and advice radiology-bound medical students get is hit or miss. Therefore, we wanted to solve that problem and help you.

From our membership, we have assembled a team of residents and attendings who have volunteered to… Continue

Osirix for the iPhone!

Imaging carrying your entire PACS system in your pocket. It will also be worth that 2 hour wait for an iPhone if you are a radiologist, perhaps even teleradiologist! Hook up some movie LCD glasses, plug it into your Osirix-enabled iPhone and you can start to dictate out studies anywhere in the world. Check this video out--an official preview of what is to come from Osirix. Watch out MIM (the recently featured radiology system at the WWDC by Steve Jobs @… Continue

ACR Statement on Imaging Accreditation in the Medicare System

Due to intense advocacy and education efforts by ACR members and staff, as well as those of other organizations, Congress recently overrode a presidential veto and passed the Medicare Improvements for Patients and Providers Act of 2008 (H.R. 6331) which averted a massive cut in Medicare physician payments. This new law, which due to ACR efforts and others, contains no imaging cuts, requires that medical… Continue

WID: "We have to new reviews for you"

We have two new reviews for you.

July 15, 2008, Reston, Va. — The American College of Radiology has reviewed the GAO’s report on imaging growth and shares many of the report’s concerns regarding the cost, quality and safety of imaging services. The College agrees with the report’s findings that financial incentives for physicians are a primary driver for the dramatic and costly growth of in-office imaging.

However, the ACR does not support GAO’s… Continue

On July 9 the Senate overcame partisan gridlock and passed the Medicare Improvements for Patients and Providers Act of 2008 (H.R. 6331) by a tally of 69-30. This vote total represents the necessary support to override a potential veto by President Bush. Several senators switched their stance from the last time the Senate voted on identical legislation July 26. Intense lobbying and grassroots by the physician community and… Continue

Featured Software: SMIViewer - A simple yet powerful platform for your volume analysis!

So if you haven't already seen SMIViewer, it is a volume analysis software. Here is a screen shot: 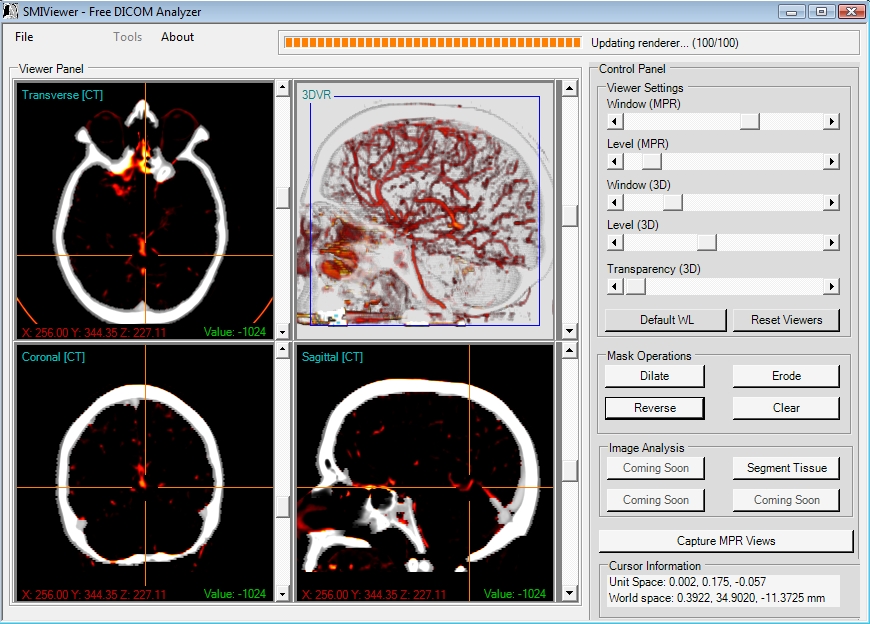 We interviewed the creator of SMIViewer and we would like to share it here on radRounds.
Tell us about yourself and about your group I am a researcher/developer working in medical imaging for past 5 years or so. Science.Medical.Imaging (http://groups.google.com/group/medicalimagingscience) is a group that originated with the goal of… Continue

Thanks Michele! Here are some cool animated cases posted by our Dr. Anzidei!

radRounds has launched the readingRoom, a section of the website that will feature interesting cases, presentations, and other useful education material. If you would like to contribute any open, creative commons licensed, non-copyrighted material to share on radRounds--please let us know or simply email your submission to readingroom@radRounds.com. We will also feature… Continue

There will be a free radiology residents review course at New Jersey Medical School on the weekend of July 12 and 13, 2008. The course will be didactic in format but will be interactive. We believe that residents preparing for the diagnostic portion of the written board examination will find the course to be extremely helpful.

There are quite a few radiology blogs out there! Great ones like Sumer's and Vijay's Scanman blog! We'd like to feature MidEssexRay along with others in upcoming blogs. Let's talk about MidEssexRay, a blog started started by Dr. Peng Hui Lee of Chelmsford, Essex, United Kingdom. Dr. PH Lee is a Consultant Radiologist of the Mid Essex Hospitals NHS Trust. It's a great blog that will cover many topics in radiology including helpful protocols and links. The URL for …
Continue

This opportunity is brought to you via HRA Research.

HRA Research is currently conducting an internet study on treatment trends for neuroradiology and neurosurgery. If you are a Radiologist who treated at least 4 cerebral aneurysms in the past month, we would like to participate in our interactive online study. We value your professional opinion and hope that you will be able to participate in this study. In appreciation of your time, we will be sending you an… Continue

The 2008 Annual Meeting Chapter Leadership Conference (AMCLC) was a big success for RADPAC. RADPAC raised $129,000 from 410 contributors compared to $110,000 raised last year from 375 contributors. In addition, of the 410 contributors at the meeting 88 were residents. There were 14 states that had all of their residents registered for the AMCLC contribute and there were 21 states that had all the councilors registered for the AMCLC contribute. Only… Continue

We are going to be conducting the first annual best radiology website awards. We are now accepting nominations. A formal voting system will be published/set up in the summer. Please send us via PM or directly by commenting here your favorite radiology sites or those you feel deserve proper recognition.

The following categories are recommended but are not limited to just these:

Please visit this board for listings in radiology residency spot openings

As the Internet evolves, we have discovered yet another new and exciting site for Radiology! Just like radRounds, RCollaboration offers many Web 2.0 social networking functions.

Attached below is a flyer for RCollaboration (http://www.rcollaboration.org). But in a nutshell...

"The goal of RCollaboration is to build a radiology learning community around content, conversations, and connections."

As the Image Gently campaign shifts into high gear since its Jan. 22 launch, ACR officials report a “strong, positive reception” from its target audience: the nation’s physicians, radiologic technologists and medical physicists who serve a primary role in medical imaging.

The campaign is sponsored by the Alliance for Safety in Pediatric Imaging, whose… Continue

Since the Jan. 22 inauguration of the Image Gently™ campaign, the message from the four charter members of the Alliance for Safety in Pediatric Imaging — the Society for Pediatric Radiology, the ACR, the American Society of Radiologic Technologists and the American Association of Physicists in Medicine — has been directed at the nation’s radiologists and… Continue