Reston, Va. (April 16, 2013) — The American College of Radiology (ACR) has been awarded Accreditation with Commendation for six years as a provider of continuing medical education (CME) for physicians by the Accreditation Council for Continuing Medical Education (ACCME).

Accreditation with Commendation is awarded to providers that demonstrate compliance in each of the ACCME’s 22 accreditation criteria. This honorable designation is achieved by approximately 21 percent…

The Radiologist-Tech Relationship: Why You Should Care 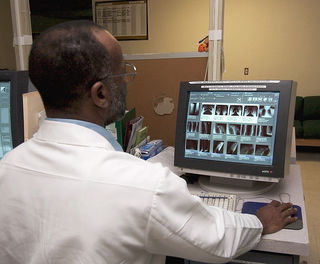 (DIAGNOSTIC IMAGING) - When you spend most of your waking hours each week at work, good relationships with colleagues go a long way in helping you improve your performance, and you’d likely feel less stressed. Often in radiology, much attention is paid to improving relations with referring physicians. What about your radiologic technologists?

The DIR is a radiology data registry that provides standardized,…

Economic case for why you should go for DR - are you using DR?

Reston, Va. (Jan. 9, 2013) — According to an article in the January issue of the ACR Bulletin, the ACR recently donated a one-of-kind film of Marie Curie receiving the ACR Gold Medal in 1931 to the Curie Museum in Paris. Famous for the discovery of polonium and radium, Curie was recognized by the ACR for her significant contributions to the field of radiology.

How the Election Will Impact Radiologists

(DIAGNOSTIC IMAGING) -- The rhetoric is off the charts: This is an election that will change everything for radiologists, for the medical profession, for the future of health care. According to this school of thought, the man who takes the White House will have a hand in determining reimbursement, setting health policy, defining quality and even allowing the independent practice of radiology to survive.

Reston, Va. (Sept. 27, 2012) — To be published online Monday, Oct. 1, a special issue of the Journal of the American College of Radiology will focus on health policy and radiology’s role in health care reform. Topics to be covered include utilization management in radiology, clinical decision support, value-based health care payment systems and patient-centered outcomes in imaging.

Reston, Va. (Sept. 27, 2012) — According to an article in the October issue of the Journal of the American College of Radiology, radiologists at Emory University Hospital, in Atlanta, and Georgia Health Sciences University, in Augusta, Ga., have developed evidence-based guidelines to assist physicians with the process of managing patients with acute low back pain. Low back pain…

(DIAGNOSTIC IMAGING) -- Feeling stressed out or lacking motivation when you read studies? If so, you have lots of company.

Radiologists rank among the top five specialties that experience the greatest frequency of burnout, according to a recent Archives of Internal Medicine study. Nearly half of radiologists reported at least one symptom of burnout. Only providers in emergency medicine, general internal medicine, family medicine, and neurology are at equal or greater risk for this…

(NEW YORK, NY) - An owner of a Queens based radiology practice, Ting Huan Tai was arrested by federal authorities for over $30 million in medicare and medicaid fraud. Allegedly, he and conspirators were billing for radiology services that were never actually performed under a former radiologist's name. The federal authorities have seized assets including a Lamborghini and other items. Ting Huan Tai is currently on a $2 million bond as the investigation continues.

The American College of Radiology (ACR) and American College of Physician Executives (ACPE) have announced an agreement making ACPE the newest affiliate organization of the ACR’s Radiology Leadership Institute (RLI). As a result of this affiliation, select ACPE courses will become a part of the RLI curriculum, allowing RLI participants to earn both RLI credits and ACPE credits. RLI participants can also use the credits they earn from other ACPE approved RLI courses toward an advanced…

Reston, Va. (July 25, 2012) — A study (Lee and Levy) published in the August issue of Health Affairs reconfirms results of previous studies that imaging use in Medicare is down significantly over the last several years (Moran Report) and that imaging is among the slowest growing of all physician services among privately insured Americans (Health Care Cost Institute). However, the list of factors cited for this decline is incomplete and the drop in imaging use is not without adverse…

Reston, Va. (July 9, 2012) – Extreme cuts to funding for medical imaging scans in the Medicare Fee Schedule Proposed Rule — particularly an expansion of the multiple procedure payment reduction for interpretation of scans performed on the same patient, in the same session on the same day, to all providers in the same practice or hospital — are unnecessary, unfounded and undermine… In this exciting opportunity you get to work with faculty from MGH and help write multiple choice boards-style review questions for the new ABR core exam. Section Editors will write questions in breast, body, cardiac, GI/GU, IR, MSK, neuro, nucs, peds, reproductive, thoracic, and US imaging. Questions and associated images can be written at your leisure…

Initial results of the RTOG 9804, the first randomized, multi-center trial evaluating treatment with radiation therapy vs. observation) for women with “good risk” ductal carcinoma in situ (DCIS), will be presented at the American Society for Clinical Oncology 2012 Annual Meeting.

Philadelphia, PA (June 1, 2012) — Ductal carcinoma in situ (DCIS) — the earliest and most curable breast cancer — accounts for approximately 20% of all new diagnoses. Prior studies of participants…

(JACKSONVILLE, FL) -- Radiologic Technologist at Mayo Clinic Pleads Guilty to Infecting Patients with Hepatitis C.  He has pleaded guilty for at least 10 crimes where he swapped out syringes that were infected with Hepatitis C. He worked at Mayo from 2004 to 2010 and he himself was infected with Hep C. He admitted to contaminating syringes by injecting himself with Fentanyl and refilled empty syringes with saline, ultimately…

Reston, VA (April 2, 2012) — The secondary cancer risk from multi-detector computed tomography (MDCT) scans is low among older adults, according to a study from Stanford University in the April issue of the Journal of the American College of Radiology (www.jacr.org). MDCT is a high-speed imaging technique that is commonly used to diagnose a variety of…

Reston, VA (March 1, 2012) — Residency training requirements in competencies related to radiology business practice and health care policy have been in place for more than a decade. However, a recent study, published in the March issue of the Journal of the American College of Radiology, suggests curricula addressing these items still seem to be in a stage of acceptance and development.

“The United States has been…