(WASHINGTON D.C.) -- If it is good enough for the President of the United States of America, it must be good enough for the citizens of the USA? President Obama just went for his physical in which he was checked from head to toe including screening for colon cancer. Did Obama and his doctor's opt for traditional optical colonoscopy or virtual colonoscopy?
Perhaps a sign of the times -- For colon cancer screening, Obama underwent one of the latest innovations in medical…
Continue

(FAIRFAX, VA) -- In a heated malpractice trial, the jury rules in favor of the plaintiff and against the radiology practice resulting in an award of $1.25 million dollars. The case surrounds a patient who had suffered from severe chest pain and underwent CT which was interpreted by the radiologist as a large hiatal hernia but ultimately turned out to be a perforated esophagus. The perforated esophagus was picked up by a surgeon upon re-review of the CT scan per various news sources. Surgery was… Continue

MILWAUKEE--(BUSINESS WIRE)-- Merge Healthcare Incorporated (NASDAQ: MRGE) today announced that it has received numerous calls from investors about its proposal to acquire AMICAS, Inc. (NASDAQ: AMCS) for $6.05 cash per share, and that, in response Merge is providing additional information to clarify certain questions raised by investors. Merge’s proposal, for an aggregate of $248 million, represents a 13% premium to the previously-announced offer from a newly-formed affiliate of Thoma Bravo, LLC… Continue

The Centers for Medicare and Medicaid Services (CMS) announced a further delay until January 3, 2011 in the requirement of ordering or referring physicians be enrollment in Medicare’s Provider Enrollment Chain and Ownership System (PECOS). Initially this requirement was to be met by December 31, 2009. Medicare ran a test on how many claims would be denied if the policy were to go into full effect and found that over one-third of all physicians who are supposed to be enrolled in PECOS had not… Continue

A poll of readers conducted by the Annals of Internal Medicine regarding United States Preventive Services Task Force (USPSTF) mammography recommendations suggests the dangerous effects that these recommendations hold for American women. Of the doctors who responded, 67 percent said they would stop routinely advising women in their 40s to get annual mammograms and 62 percent would advise women 50 to 74 to get a mammogram every other year rather than annually. In addition, 41 percent will stop… Continue

The Centers for Medicare & Medicaid Services (CMS) is conducting a national “dry run” of reporting data for four Outpatient Imaging Efficiency (OIE) measures included in the Hospital Outpatient Quality Data Reporting Program (HOP QDRP). Throughout the 30-day dry run, which ends March 18, hospitals may submit questions or comments regarding the Hospital Specific Report (HSR) or the OIE measure methodology to imaging.measures@Lewin.com. The ACR-ARRS encourages its members who have… Continue

Radiology plays greatest role to date at the Olympics

Never in the history of the Olympics has diagnostic imaging played such a huge role. For the first time ever at the Winter Olympic games taking place in Vancouver, Canada, all four modalities–digital radiography, ultrasound, CT, and MRI–are represented in both the Alpine
and city…

On Feb. 4, the Alliance for Radiation Safety in Pediatric Imaging expanded the Image Gently initiative (www.imagegently.org) to digital radiography exams (standard x-ray technology) by hosting a Digital Radiography Summit at the Mallinckrodt Institute of Radiology at Washington University in St. Louis.

The summit bought together nearly… Continue

NIH Takes Step to Assess Any Possible Risk Associated With Low-Dose Radiation Exposure
Researchers at the National Institutes of Health (NIH) Clinical Center are incorporating radiation dose exposure reports into the electronic medical record, an effort that they hope will lead to an accurate assessment of whether any cancer risk is associated with low-dose… Continue

The ACR, along with several other organizations, is helping to fund a CT Dose Summit on Scan Parameter Optimization April 29- 30, 2010, in Atlanta, GA. The summit, organized by the American Association of Physicists in Medicine, will demonstrate how scan acquisition and image reconstruction parameters should be selected and managed to improve image quality and reduce radiation… Continue 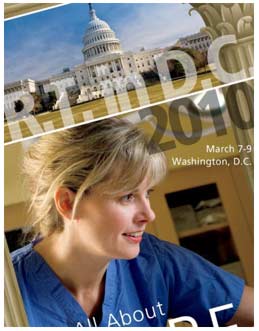 (ASRT) -- The American Society of Radiologic Technologists 12th annual R.T. in D.C. is March 7-9, 2010. This is the premiere advocacy event for medical imaging and radiation therapy professionals and an opportunity to educate our leaders in Washington and let them know all about the CARE bill, patient safety, quality health care and rising health care costs – the issues that affect the professional and patients. For…
Continue

Fuji takes its digital portfolio to the next level

(DIAGNOSTIC IMAGING) -- Say “computed radiography” and the name Fujifilm is bound to come up among those in the know. The Japanese company invented CR, introducing this digital technology to U.S. customers 27 years ago. In the decade since flat-panel x-ray detectors were introduced, Fujifilm has been a stalwart advocate of the phosphor-based technology, successfully arguing its role as a costeffective way for U.S. radiography departments to go digital, even as the price of flat-panel systems… Continue

The early bird registration deadline for the 2010 ARRS Annual Meeting, May 2-7, in San Diego has been extended to February 19 due to the snowstorm that has shut down most of the Washington, DC, area, including society offices.

1. The MGMA surveys its member groups and collects compensation data. The most recent data are from 2006. (As of August 1, 2008, data will be updated with the most recent data available.) The data are not nationally representative. Responses are tabulated separately by academic and non-academic practices. Typically,… Continue

Five easy ways to get involved in social networking

In this article, I will introduce you to five easy ways to dive deeper into Web 2.0’s array of social networking tools. There are numerous websites and ways to get started. With these tips, you will easily be able to:

ECR FOR FREE! with the COVIDIEN-ESR Educational Grant 2010

Thanks to the generosity of Covidien, lucky applicants will receive FREE registration, travel and accommodation for ECR 2010, via the new Covidien-ESR Educational Grant. Application is possible from 08:00 CET, on Tuesday, February 16 and is open to radiologists and residents from Europe, Russia and CIS countries, and the Middle East, who are not already registered for ECR 2010.