Kevin's Covers - Adjustable IV and Indwelling Catheter Covers (and beyond)

radRounds Radiology Network is pleased to introduce you Carolyn Grissom who has created an entire series of products that can be used by interventionalists, PICC nurses, and anyone who places intravenous lines.

Kevin’s Mom, Carolyn Grissom, made his (Kevin's) first fabric Cover Sleeve after the cap of his PICC line caught on a doorknob; the only options they were offered at the Emergency Room at Duke Medical Center was to cover the line with a tube sock or panty hose. Kevin’s cardiologist, Dr. James Rene Herlong, suggested she make some for the Ronald McDonald kids and they loved them. Her father, Donald E. McCollum, Professor of Orthopedic Surgery at Duke Medical Center, also told her she should pursue this venture. So Carolyn wrote the first provisional patent and accepted an invitation to the Association for Vascular Access (AVA) conference as an exhibitor. She found a subcontractor to sew the sleeves in N.C. and a business was born. Soon after, the sleeves were the featured product in the Spring issue. She later engaged patent attorneys for conversion to a regular patent. Kevin wore the original design which opens flat on the work surface during his first staph aureus infection. When Kevin got another PICC for a cardiobacterium 5 years later, he requested a closure that he could open and close himself while at school. This is the “independent sleeve” that uses a one motion closure that’s used most often for ambulatory patients. Frustrated with duct tape and saran wrap for showering, Carolyn took her shower curtain down and cannibalized some workout equipment for a makeshift shower sleeve for Kevin. Dr. Mauro Pittiruti of Catholic University in Rome had spoken of shower water as a gram negative contamination hazard for PICCS at the 2006 AVA Conference. After several prototypes, the adjustable, waterproof, breathable sleeve has now been successfully trialed at Duke Medical Center. A patient / clinician at a conference last year said she’d bought an extra large size to use for her total knee replacement in the shower and it had worked like a charm. Plans for distribution through hospitals and other health care facilities, as well as home health care networks are in the works. Individual sales are also available on the website, kevinscovers.com. In the last year, Carolyn has also designed and patented, at the request of a clinician in the echo lab at Duke, a baby wrap that allows for the positioning of babies for echocardiograms while the little ones are still snuggled in flannel. There are strategic openings for access to monitors and lines, at the same time swaddling the baby. This product has also been used in the echo lab successfully, and even requested as a take home item by a patient’s Dad. The wrap will be easily adaptable for other babies undergoing certain medical procedures throughout the hospital. By listening closely to patients and clinicians throughout the design process, and doing her best to bring a quality product with excellent service, Carolyn plans to continue to design products that make patients’ and caregivers’ lives less stressful. For more information, please visit Kevin's Covers at http://kevinscovers.com/ 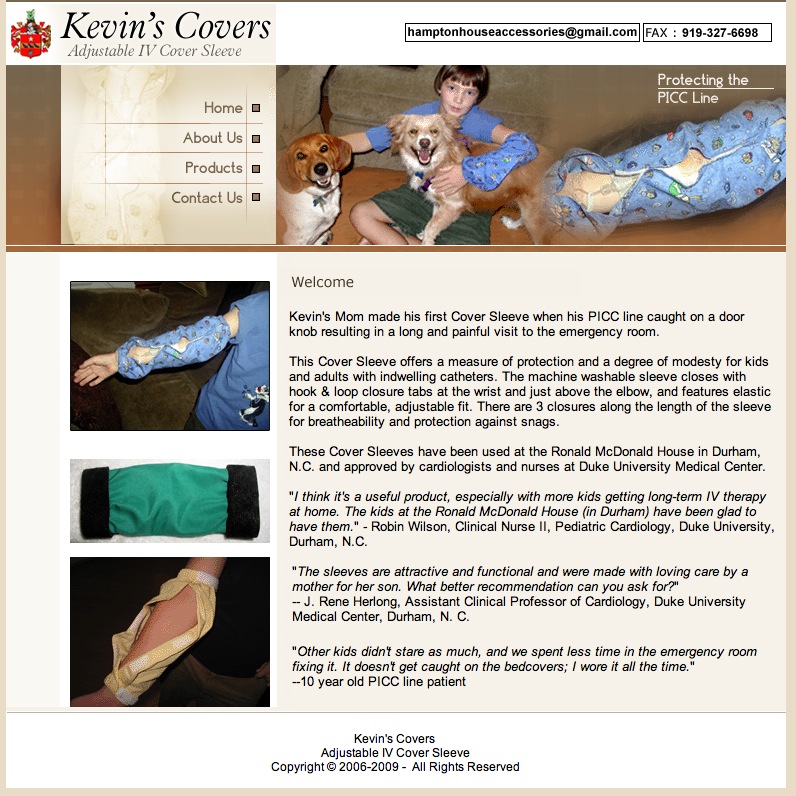