(RESTON, VA) - The recent safety investigation by the FDA of “radiation overexposures during perfusion computed tomography (CT) imaging to aid in the diagnosis and treatment of stroke” highlights the importance of carefully evaluating protocols for all CT procedures relative to both radiation dose and image quality.

(DIAGNOSTIC IMAGING) -- A proposal that could allow higher payments for physicians who refer patients in accordance with appropriateness criteria has been added to a healthcare reform bill now before the Senate Finance Committee. The America's Healthy Future Act of 2009 would create the CMS Innovation Center, a new Medicare program charged with evaluating and implementing physician payment methods that keep quality patient care up and costs down. The bill builds upon a four-decade old law that… Continue

(DIAGNOSTIC IMAGING) -- Joanna Fowler, Ph.D., a major contributor to brain research and a pioneer in molecular imaging, will be awarded the National Medal of Science, the highest award this country bestows for lifetime achievement in science. A senior chemist and director of the radiotracer chemistry, instrumentation, and biological imaging program at the U.S. Department of Energy's Brookhaven National Laboratory in Upton, NY, Fowler was a member of the research team that in 1976 first… Continue

Meaningful Use of Certified EHR Technology FAQ by the ACR

The following information is provided in response to inquiries from our members regarding the “meaningful use of certified electronic health record (EHR) technology” incentives program authorized by the American Recovery and Reinvestment Act. This article is for general informational purposes only, and is not a legal document or guidance.

The American Recovery and Reinvestment… Continue

Tissue Strain applications provide a new dimension of diagnostic information through either qualitative assessment or quantitative measurement of the mechanical stiffness of tissue. Presentations will cover Elastography and Acoustic Radiation Force Impulse1 (ARFI) ultrasound clinical applications, as well as… Continue

MRI cracks down on ‘age doping’ in international sports

(DIAGNOSTIC IMAGING) -- MRI has been adopted as a definitive measure for fair play by the International Federation of Association Football, the governing body for international soccer competition. FIFA will launch a program of random MRI wrist screening to verify the age of players competing in the Under-17 World Cup hosted by Nigeria Oct. 24 through Nov. 15. The issue of fielding over-age players has been around for some time. It made headlines again last March at the Confederation of African… Continue

Intelerad Medical Systems, an industry-leading PACS solution vendor, has announced the latest IntelePACS enhancements and new modules it will preview at RSNA 2009.

Intelerad will demonstrate its integrated Mammo Viewer for the first time at RSNA 2009. This Integrated Mammography Viewer includes functionalities such as user specific viewing sequences and an array of tools that meet the needs of radiologists who wish to read from a single, true multi-modality viewer. This eliminates… Continue

(NEW YORK) -- Claustrophobic patients are a common finding in the field of medical imaging. With increasing use of MRI and longer imaging studies, radiologists and radiology technologists are often encountering the need to move beyond simply conscious sedation (i.e. Ativan or other benzodiazepines or medications to relax patients). Dr. Helen Pavlov explores the use of alternative therapies such as Hyponosis and other remedies in the pre-imaging prep of patients.

In her most recent… Continue

You see your spouse and kids every day, but you might not always tell them how you really feel — especially when it comes to your job. We asked doctors in our 2009 Great American Physician Survey to fill in “what I would like to tell my spouse/my kids about the life and work of a modern physician.” Answers for spouses and kids were recorded in separate fields, and ran the gamut of emotions. Here are 10 that stood… Continue

(NEW YORK) -- AuntMinnie.com, a leading web portal for radiology has announced this year's winners of the Auntminnie Minnies' !!

The AuntMinnie.com 2009 edition of the Minnies awards recognizes excellence in radiology. This year's campaign featured 137 candidates in 13 categories, ranging from Most Influential Radiology Researcher to Best New Radiology Vendor.

We at radRounds would also like to extend our congratulations to the winners! For the complete list, please visit… Continue

The Senate voted Oct. 21 on a motion to invoke the cloture on the Motion to Proceed to S. 1776, a bill by Senator Debbie Stabenow (D-MI), to amend title XVIII of the Social Security Act to provide for the update under the Medicare physician fee schedule for years beginning with 2010 and to sunset the application of the sustainable growth rate (SGR) formula.


The vote failed, 47 to 53, thus ending further debate of this… Continue (DIAGNOSTIC IMAGING) - by James Brice A forward-looking commentary in the Journal of the American Medical Association and related news coverage in The New York Times have drawn public attention to the diagnostic limitations of mammography and prostate cancer screening and future opportunities to develop better tests. "Rethinking Screening for Breast Cancer and Prostate Cancer," a special communication in the Oct. 21 JAMA reviewed 20 years of breast and prostate cancer screening research to… Continue

(DIAGNOSTIC IMAGING) -- Imaging experts are lining up to caution physicians not to read too much into study findings suggesting that chest CT is better than general radiography for examining A-H1N1 flu patients. They say CT can complement the diagnosis and management of patients with the swine flu, but it should never be considered as a first-line diagnostic test for the disease, especially in pediatric patients. Evidence regarding the benefits of CT scanning in cases of patients affected by… Continue

(DIAGNOSTIC IMAGING) -- Radiologists and other physicians are feeling the frustration of losing a key Senate vote that would have erased an impending 21% Medicare rate cut and killed the sustainable growth rate policy that has forced Congress to delay other planned rate reductions for each of the past seven years. The inability to find a financial offset to pay for the accumulated $245 billion cost of those delays was cited as the main reason a key procedural measure failed. The measure… Continue

(NEW YORK) -- According to the latest data by Salary.com for radiology technologists / radiologic technologists, the median expected salary for a typical RT in the United States is $46,916. Per Salary.com, this basic market pricing report was prepared using our Certified Compensation Professionals' analysis of survey data collected from thousands of HR departments at employers of all sizes, industries and geographies. …

(MERGE HEALTHCARE) Health I.T. solutions will be on display at the China International Medical Equipment Fair

MILWAUKEE--(BUSINESS WIRE)-- As a part of its ongoing strategic objective of expansion in China, Merge Healthcare (NASDAQ: MRGE) will be exhibiting at the China International Medical Equipment Fair, which will be held at the Chengdu Century City New International Convention & Exhibition Center, October 28 - 31, 2009. Merge, a leading health IT provider, regained and began… Continue

(NEW YORK) -- GE has a great new product. According to GE's website, there is a new ultra-smart and ultra-small ultrasound device that is a mix between an iPhone/mobile phone and "stethoscope." According to GE Healthcare, this is the "stethoscope of the 21st century" targeted for us by not only radiologists, but primary care physicians and physicians in rural areas. Price has yet to be determined. … 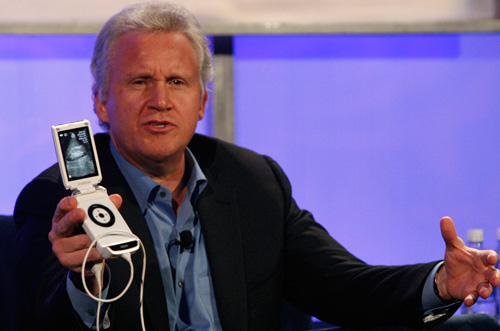 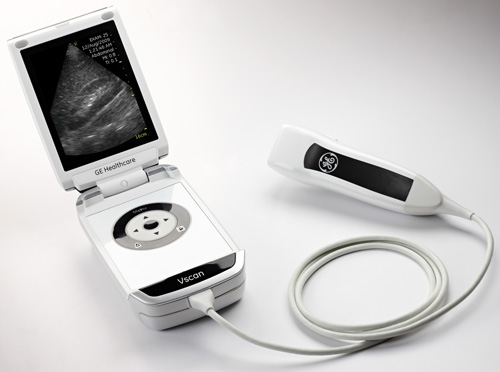 (DURHAM, NC) -- Radiologists at Duke University Medical Center have developed a scale called the Duke Abdominal Assessment Scale (DAAS) to assist clinicians in determining the severity of disease and the need for surgery in infants with necrotizing enterocolitis (NEC), according to a study in the November issue of the American Journal of Roentgenology.

NEC is a serious disease that causes infection and inflammation of the intestines in infants, primarily those that are premature. Its… Continue

(DIAGNOSTIC IMAGING) -- The possibility that radiologists will score a major victory in healthcare reform legislation grew stronger this week with the endorsement of a proposal to link physicians' pay to the use of appropriateness criteria in the ordering of imaging studies. The last-minute addition to the Senate Finance Committee reform bill was approved by the panel Oct. 13 and will be debated with the rest of the reform bill on the Senate floor, mostly likely this week. "This is an effort to… Continue