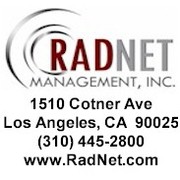 AB 359 (Nava) - Requires digital mammography screening to be covered under the "Every Woman Counts" (EWC) Cancer Detection Program administered by the California Department of Public Health when analog mammography is not available.

WASHINGTON - Breast cancer survivors who take aspirin regularly may be less likely to die or have their cancer return, U.S. researchers reported Tuesday. The study of more than 4,000 nurses showed…Continue

You need to be a member of RadNet Management, Inc to add comments!

March 10, 2010 — A third study, and the first to be published, has found a reduction in the risk for breast cancer among postmenopausal women taking bisphosphonates for the treatment of osteoporosis.

The new finding, reported in the March 2 issue of the British Journal of Cancer, comes from a case–control analysis of more than 6000 women in Wisconsin, half of whom were diagnosed with invasive breast cancer. It found that the use of bisphosphonates was associated with a 30% reduction in the risk for breast cancer.

"This large study provides new evidence that the use of bisphosphonates is associated with a potentially important reduction in breast cancer risk," lead author Polly Newcomb, PhD, MPH, head of the Cancer Prevention Program at the Fred Hutchinson Cancer Research Center in Seattle, Washington, said in a statement.

This reduction in breast cancer risk is similar to that already reported in 2 other studies, both of which were presented in December 2009 at the San Antonio Breast Cancer Symposium. One was an analysis of more than 150,000 postmenopausal women participating in several Women's Health Initiative studies, which found that bisphosphonate use reduced the risk for invasive breast cancer by 32%. The other involved an analysis of 4575 postmenopausal women in Israel, which found a 34% reduction.

At the time, the fact that a similar finding came out of 2 geographically different populations was described as "encouraging," by Theresa Guise, MD, professor of medicine and oncology at the Indiana University School of Medicine in Indianapolis, who was not involved in either study. However, she cautioned that "this needs to be confirmed by controlled clinical trials."

There was some discussion at that meeting about possible confounding factors. For example, women who were taking bisphosphonates for osteoporosis would have low bone-mineral density, and this in itself would indicate lower estrogen levels, which would influence the risk for breast cancer.

In the latest study, Dr. Newcomb and colleagues emphasized that they were able to account for important confounders, such as body mass index and postmenopausal hormone use.

In addition, they analyzed the reasons for which bisphosphonates were prescribed, such as fractures, height loss, and physician-diagnosed osteoporosis. There was a suggestion that the use of bisphosphonates was associated with a reduced risk for breast cancer only among women reporting symptoms of bone loss, but this was not statistically significant.

"This association was not attributed to the primary indication for use, bone density loss, or fractures, which we and others have previously shown as a risk factor for breast cancer," the authors write.

The researchers therefore conclude that "these findings may reflect real benefits due to antitumor mechanisms" of bisphosphonates.

However, the association with a reduction in the risk for breast cancer was seen only among women who were not obese; they were not seen among obese women. This suggests that the inhibitory action of these drugs is related to some threshold effect of hormonal or other growth factors, which are known to be important etiological exposures in breast cancer, the researchers write in their paper.

"Obese women may have elevated estrogen levels, so underlying hormones may influence the ability of bisphosphonates to reduce breast cancer risk," Dr. Newcomb added in a statement.

How bisphosphonates could prevent breast cancer is not known, but these drugs have several actions that might be relevant; they have been shown to cause tumor apoptosis, inhibit angiogenesis, and prevent tumor-cell adhesions. "These drugs may affect cell function and be important in cell growth and death — specifically the death of tumors or even premalignant disease," Dr. Newcomb noted.

There has also been a large study reporting beneficial antitumor effects of bisphosphonates in women who already have breast cancer, which hints of this effect from another 2 studies. A recent editorial in the Journal of Clinical Oncology (2009;27:4043-4046) discussing these findings suggested that in the "seed and soil" hypothesis for cancer development, bisphosphonates might create an "unfavorable soil" in which the development of cancer cells is thwarted.