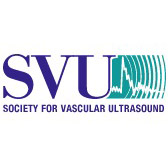 SVU is the only professional organization completely dedicated to the advancement of noninvasive vascular technology used in the diagnosis of vascular disease.

About SVU - Society for Vascular Ultrasound

Established in 1977 in Columbus, Ohio, as the Society of Non-Invasive Vascular Technology (SNIVT) and now known as the Society for Vascular Ultrasound (SVU), formerly the Society of Vascular Technology (SVT), SVU is the only professional organization completely dedicated to the advancement of noninvasive vascular technology used in the diagnosis of vascular disease. The Society’s success for 30 years is based on the involvement of a diverse membership of vascular ultrasound professionals, including vascular technologists, sonographers, echocardiographers, vascular surgeons, physicians, nurses, vascular lab technical directors and other allied healthcare professionals. Located in the Washington, DC, suburb of Lanham, MD, SVU provides its members with regional continuing medical education programs on both introductory and advanced vascular interpretation, clinical and scientific manuals, Vascular Case Study CDs, an extensive website (www.svunet.org), networking opportunities, an annual conference, an Online Job Center, and extensive regulatory and legislative advocacy representation. Of SVU’s approximately 4,600 members, 24 percent are physicians. SVU publishes a monthly electronic newsletter called e-Spectrum, which is posted on the SVU website (www.svunet.org), as well as a quarterly scientific publication on vascular technology called the Journal for Vascular Ultrasound (JVU).

This group does not have any discussions yet.

You need to be a member of Society for Vascular Ultrasound to add comments!